That was all 16-year-old Sharifullah Azizi brought with him to the United States, as he escaped Afghanistan with relatives in August.

Amid the chaos and turmoil of the Taliban takeover, Sharifullah said goodbye to his parents, and, unable to take anything with him, rushed to the Kabul airport with his sister Safia Haqanzai, her husband Hamidullah, and their immediate family.

An Afghani civil engineer who had worked with the Army Corps of Engineers, Hamidullah first left his home country four years ago as the Taliban began to exert power, eventually settling in Louisville.  He and his family returned to Afghanistan for two months this past summer to celebrate family weddings. But as the Taliban took control, Hamidullah used his connections to try and get as many of Safia’s family members out of the country as soon as possible

Only her brother made it out with them. 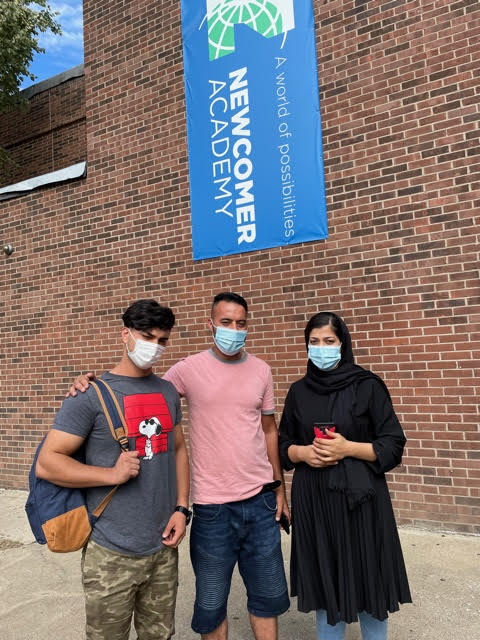 What followed was a harrowing exit from Afghanistan: the family tried to leave from the Kabul airport for two days, barely making it out as a suicide bomber outside the airport killed dozens of Afghans, before traveling through Dubai and Germany on their way to the U.S. But that journey was just the beginning of the ordeal.

Now 17, Sharifullah is trying to fit into a new country, a new school, and a new life here in Louisville – all without his parents, who remain in Afghanistan.

“He cries all the time,” Hamidullah said. “He is a kid. He needs his parents.”

It is a scenario all too familiar to Gwen Snow, principal of Jefferson County Public Schools’ (JCPS) ESL Newcomer Academy, where Sharifullah is now enrolled.

Students come to Newcomer with a wide variety of backgrounds, Snow said. Some may have had a strong educational background but come to the U.S. with their parents for a work opportunity and don’t speak English yet. The majority, however, have very little English exposure, and many have had significant interruptions in education throughout their life.

“We might be teaching Algebra 1 to a student who has very little numeracy background,” Snow said. “There’s quite an academic gap – it’s hard sitting in an algebra class if you don’t speak English.”

Newcomer also supports the social and emotional needs of international students, many of whom have frequently experienced trauma. “Think about a 15-year-old who switches neighborhoods,” Snow said. “That alone is a big deal. But for someone who experiences fear, living in a refugee camp, different ways of coming here, leaving behind family members, not knowing what’s going on – that’s traumatic.”

Snow said the school works hand-in-hand with refugee agencies, and has begun working more closely with Louisville Metro Government’s Office of Globalization to provide services and resources to English language learners. Some students come to the U.S. outside of a refugee agency and stay with extended family, “but even that creates a struggle, too,” Snow said.

“Sometimes they’re being reunited with a family they haven’t seen for a long time.”

“Most of them are pretty nervous,” she added. “We just try to help them as much as possible because we know that will make them successful.”

In many cases, the biggest help for students will be other newcomers themselves. “In most cases, they’ve all been newcomers, so they just know,” Snow said. “They’ll walk them in and say, ‘this one’s new.’”

But even with assistance, refugees still face a burden.

Hamidullah continues to work with local and U.S. officials to try and get his in-laws out of Afghanistan, but the process is slow and information about their safety and whereabouts is sporadic.

For Sharifullah, who has made some friends at Newcomer, the pain of being separated from his family overshadows everything else.

“The situation in Afghanistan is very bad,” Sharifullah said. “All the time I’m thinking of my family.  I want my family here in America.  I miss my parents, my mom, my dad.

“I wish they were here.”